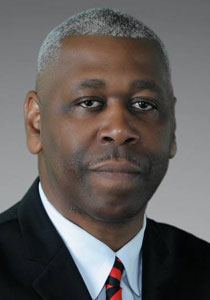 Mayor Darnell Waites is a retired U.S. Army veteran.  He served 27 years in the U.S. Army in several leadership positions including that of First Sergeant.  Mayor Waites has a Bachelor of Arts Degree in History from Ashford University and an Associate Degree in Applied Sciences from Excelsior College.  He is also a graduate of the United States Army Sergeants Major Academy.  After his military career, Mayor Waites and his family moved to Baker, LA.  He is married to the former April Johnson, who also served in the military and is the father of four children.  Mayor Waites began his employment with the City of Baker School System in August of 2009 and served as a teacher and as a high school basketball coach.  His passion was demonstrated in his zeal for helping the students succeed in academics and sports.  Following his time with the City of Baker School system, Mayor Waites was hired as the Administrative Officer in February 2013 under the leadership of former Mayor Harold Rideau.

In April of 2016, Mr. Waites was elected to the office of Mayor of the City of Baker.  As Mayor, he has used his training and experience from his years of military service.  His background has guided him to a lifelong commitment of serving with the hopes of improving the lives of others.  The citizens of Baker interests are his main concern.  Mayor Waites’s primary focus is on promoting unity and stimulating economic development in Baker.  During his tenure, he has sparked an aggressive theme of unity in city government, civic groups, and the faith community.  Mayor Waites believes in the importance of diverse viewpoints and building coalitions that make progress towards a cultivated and  productive city.  A few business development community and church collaboratives that were established or that have grown include the Mayor’s Annual Prayer Breakfast, the Buffalo Festival, and the newly launched Canopy of Prayer initiative.